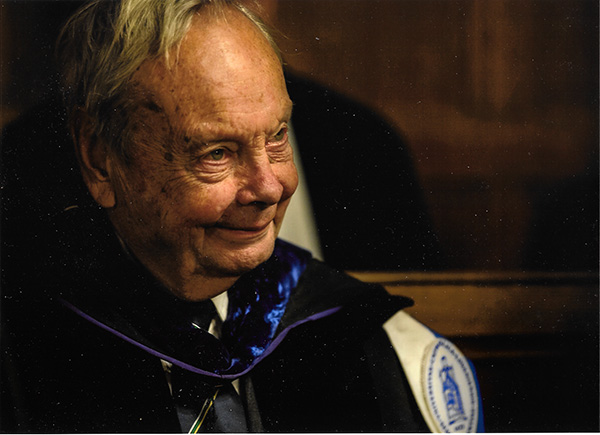 The well-known researcher of conflict resolution Professor I. William Zartman was installed as honorary doctor of Uppsala University at the Winter Conferment ceremony on January 26, 2018.

Professor Zartman is the Jacob Blaustein Professor Emeritus at the Johns Hopkins University, in Washington, D.C. He is prominent in the PIN research network (Process of International Negotiations). He is author and editor of a wide range of books dealing with pertinent topics, notably mediation, conflict resolution, deadly conflict and genocide. He has been a frequent visitor to the Department over the past 25 years, including serving as external examiner, lecturer, supervisor and researcher, presently being involved in the project Resolving Jihadist Conflicts? He has made concepts such as ’ripe for resolution’ and ’hurting stalemate’ researchable contributions to the field.

In the Promotion Ceremony on Friday 28 January 2011, the Faculty of Social Sciences at Uppsala University awarded to Tor Sellström (b. 1946) the title and diploma of Honorary Doctor. Tor Sellström has worked in or on Africa, particularly Southern Africa since 1977, mainly as a development bureaucrat, policy maker and practitioner for Swedish Development Cooperation (Sida) and the Swedish MFA, but also for local NGOs and research institutes. His work has covered areas such as liberation, state formation, nation-building, democratisation and sustainable development. He is the author of many publications in these areas.

Sellström receives the degree of Doctor honoris causa (D.h.c.) for his monumental research on the liberation struggles in Southern Africa, and for successfully bridging the fields of academia, policy and practice. Mr. Sellström recently returned from South Africa to Sweden to take up a position as senior researcher at the Nordic Africa Institute (NAI) in Uppsala. His current research project is entitled “African Island States in Peace and Conflict: Rising Tides in the Indian Ocean.

Dr Kofi Annan has a long and distinguished career as an international civil servant within the United Nations. He received Nobel Peace Prize in 2001. Beginning in 2007 he is residing in Switzerland and in his home land Ghana. He now is engaged in The Elders a group of former state leaders working in international negotiations, as well as in issues of agricultural development in Africa. He was promoted Dr hc in May 2007 on the occasion of the 300th anniversary of botantist Carlus Linnaeus, Carl von Linné.

Jan Eliasson has been Sweden’s Minister for Foreign Affairs (2006) and was President of the sixtieth session of the United Nations General Assembly (2005-06). He was Sweden’s Ambassador to the United States (2000-05), and State Secretary for Foreign Affairs 1994-2000. He was appointed Honorary Doctor of Philosophy at Uppsala University in January 2006. During the first half of 2007 and 2008 he served as Visiting Professor at the Department of Peace and Conflict Research, Uppsala University. He has written on conflict prevention issues.

Among his contribution to peace research is also his work on the Democratic Peace, later expanded to be the Kantian Peace. He became Honorary Doctor of Uppsala University, January 25, 2002.

Founder of the International Peace Institute, Oslo (PRIO) 1959 and the Journal of Peace Research 1964, prolific writer on peace research and on public affairs, became Honorary Doctor at Uppsala University in 1987.