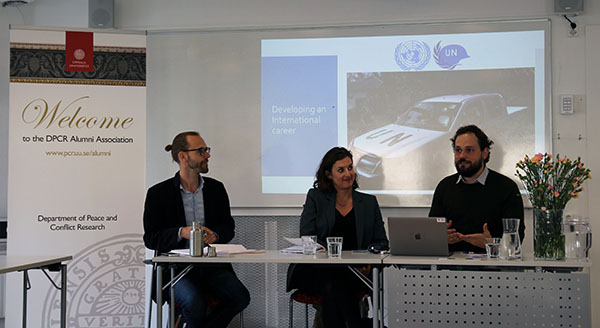 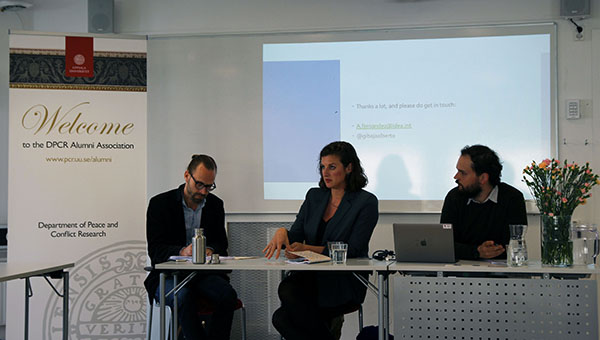 The DPCR Alumni Association held its fifth Alumni Talks on 7 May. This year we welcomed Alberto Fernandez Gibaja and Martina Klimes, both alumnus from DPCR. The event was moderated by Professor Isak Svensson.

The Alumni Talks serves as a source of inspiration and advice to current students and recent graduates with regards to potential career paths following an education in peace and conflict studies. The alumni share information about their current jobs and the paths that lead them there and can provide insights gained along the way. It is an opportunity for students interested in pursuing similar careers to ask questions and build connections with those that have more working experience.

Alberto Fernandez Gibaja (DPCR Master class of 2009) is a Programme Officer in the Political Participation and Representation Programme at International IDEA. Alberto's work focuses on the politics of economic development and its implications. He also explores the relationship between political participation and new technologies, i.e. the linkages between democratically elected institutions and organisations and citizens, and how technology can strengthen citizen's ownership of democracy. Previously, he worked as a Governance Officer for the United Nations Integrated Mission in Timor Leste, among other positions.

Martina Klimes (DPCR Master class of 2006) is an Advisor for Water and Peace in the Transboundary Water Managment Dept. at the Stockholm International Water Institute (SIWI). In this role she is advising on SIWl's activities in transboundary basins affected by water scarcity, political tensions, and armed violence. Martina Klimes has over 10 years of experience working with dialogue facilitation, conflict resolution, political and security analysis, including practical work in the field and informal diplomacy processes. Her main research focus is on peace processes, incentives, and third party involvement in peace negotiations. 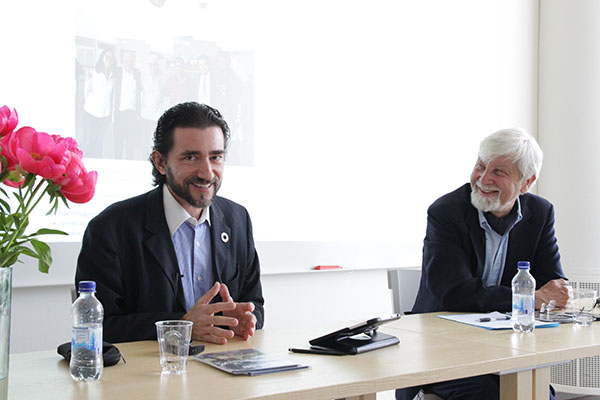 The DPCR Alumni Association held its fourth Alumni Talks on 30 May. For this year’s talk we welcomed Professor Gilberto Rodrigues, currently Professor in International Relations at the Federal University of ABC in São Paulo, Brazil. Professor Rodrigues is an alumnus of the DPCR, having taken the Conflict Resolution Course in 1996.

In his talk, Professor Rodrigues shared his insights on the protection and integration of refugees in Brazil, and how government and civil society are dealing with this great humanitarian challenge. He spoke about the Sergio Vieira de Mello Chair on refugee services that he currently co-coordinates in collaboration with the UNHCR Office in Brazil. He also shared the personal story of how his academic career has developed, from early university studies to a professional academic.

A closer look at the United Nations

Louise Olsson (PhD at the Department in 2007) is a researcher at the DPCR and the Senior Advisor on Women, Peace and Security at the Folke Bernadotte Academy (FBA). This means that she constantly moves between research and practice. Among her many tasks, she has reviewed how the field operations of NATO, the UN and the EU handle women’s and men’s security and participation. Olsson has also developed a Research Working Group on Women, Peace and Security, to strengthen systematic knowledge development, and a Gender Coach Program, both for the Swedish Ministry of Foreign Affairs and for government agencies such as the FBA and the Swedish Armed Forces, which is a training program for senior management.

Henrik Hammargren (Master at the Department in 2004) Executive Director for the Dag Hammarskjöld Foundation, has spent twenty years in managerial and policy analyst roles, advising bi- and multilateral development co-operation, serving the Swedish government and with the OECD. Areas of focus have included humanitarian aid, conflict management and peacebuilding, and support to democracy and human rights. Hammargren also has several years of in-country experience from conflict and post-conflict regions.

The talk was moderated by Professor Peter Wallensteen who is a Senior Professor of Peace and Conflict Research since 2012, Holder of the Dag Hammarskjöld Chair 1985-2012, Head of Department 1972-1999, leader of the Uppsala Conflict Data Program until 2015 and the author of books, book chapters and articles in topics also relating to the UN, the UN Security Council, peacebuilding and negotiations, notably Quality Peace (2015) and Fredens Diplomater (with Isak Svensson 2016).

DPCR Alumni Talks 2016: Democracy from Below or Above? Prospects and Challenges for Peace

The DPCR Alumni Association held its second Alumni Talks on 28 April, this year with the theme “Democracy from Below or Above? Prospects and Challenges for Peace”. The two main speakers were Professor Kristine Höglund and Professor Isak Svensson, who both took up the positions as Professors at the Department last year. Isak Svensson's research focuses on international mediation in civil wars, religious aspects of conflict resolution processes, and dynamics of strategic nonviolent conflicts. Kristine Höglund's areas of expertise are peace processes and peacebuilding, electoral violence, and transitional justice. The talk was moderated by Professor Peter Wallensteen.

Watch the The Alumni Talks 2016

DPCR Alumni Talks 2014: Peace in the World: Trends in Modern History and Prospects for the Future

The Department of Peace and Conflict Research and the DPCR Alumni Association on 26 February 2014 brought together the most recent Dag Hammarskjöld Professors to talk about their views on the emerging trends in peace throughout the world. In the well-attended alumni event, Professor Peter Wallensteen and Professor Håvard Hegre presented historic trends and predictions on conflict and peace in the world. Departure for the discussion were two articles by the professors, recently published in the Journal of Peace Research. The event was moderated by Professor Erik Melander. After interesting presentations and discussions the speakers mingled with the alumni at the following reception.