The East Asian Program was finalized on 31 May 2017, so from then this website will not be further updated.

The East Asian Peace program aims at explaining the East Asian peace and establishing its depth. The program, funded by the Riksbankens Jubileumsfond, is led by Stein Tønnesson at the Department of Peace and Conflict Research, Uppsala University.

Praise and Criticism of Our Books

Nils Petter Gleditsch does not agree that the peace is so uniquely East Asian as our program has claimed. Instead he sees a global peace trend, with the Middle East as an exception. He also criticizes our choice to develop rival theories to explain the East Asian Peace instead of forming a comprehensive theory, combining several causal factors.

Jo Inge Bekkevold agrees with what he sees as the three main messages in the Debating Peace volume, although he does not find them groundbreaking. He praises Tønnesson’s “developmental peace” theory for accentuating the role of Japan, but criticizes Tønnesson for underestimating the importance of security. It is only possible for a government to prioritize economic growth if it enjoys a basic level of security. Therefore, 1971-72 was just as important as a turning point for China as 1978-79: the security gained by Sino-US rapprochement made Deng Xiaoping’s market economic reforms possible. And today, the security in the region is threatened by a fundamental change: China has become a seapower in addition to a continental power. This is not sufficiently emphasized in Tønnesson’s monograph.

Along with these two critical blogs you will also find program leader Stein Tønnesson's blog "Can the East Asian Peace Survive?" https://blogs.prio.org/2017/05/can-the-east-asian-peace-survive/

The Swedish TV journalists Thomas Heldmark and Rolf Wrangnert have produced a film for Uppsala University about the East Asian Peace. It seeks to explain how a whole region with more than 30 per cent of mankind, could make a transition from widespread warfare to what some call a "surprising peace". The film features conflicting views as to how deep or sustainable the regional peace has become. See the film here or find it on YouTube. You can choose the English, Chinese or Japanese version of the film!

Our 6th and final conference, titled "Regional Peace: Lessons from East Asia" was held in Uppsala 15 June and in Stockholm (hosted by the Swedish Institute of International Affairs) on 16 June. Kristine Eck gave the keynote address "The Price of Peace: State Repression and Quiescence in East Asia” We had panel discussions about "Predicting China", "Peace Processes in East Asia", and "Power Shifts and Peace",  presented the main findings from the program, and Advisory Board member  Thommy Svensson reflected on how the program should be followed up after it ends on 31 December 2016. We also launched a film about the East Asian Peace (in English and Chinese) and a book-length monograph in Swedish, published for our funder, Riksbankens Jubileumsfond, by Makadam förlag. For the full conference program, click here.

EAP members featured in Global Asia special issue, The East Asian Peace: How It Came About and What Threats Lie Ahead

The fifth annual conference was hosted by the Asia Research Institute, National University of Singapore from 6–8 November 2016. Professors Miriam Coronel-Ferrer (Manila) and Dan Slater (Chicago) served as keynote speakers, and altogether papers were presented at panels. View the conference program. After the conference the Swedish Vetenskapsjournalisterna produced a short film from the conference, which you can see here. It gives a vivid impression of the vibrant scholarly debates unleashed by the program through its multi-national composition.

Miriam Coronel-Ferrer, a professor of political science at the University of the Philippines and EAP research associate, has worked as a chief negotiator of the Philippine government in the recent Mindanao peace talks. She is the first female to head peace negotiations for the Philippines. More about the award can be found here.

The EAP Fourth Annual conference 2014, "Peace and Interdependence", jointly organised by the School of International Studies Peking University was held at Peking University in Beijing, China from 29 October – 1 November. Over 35 international scholars participated from the United States, Europe, Asia, and the Pacific.

The EAP program submitted a comprehensive report of our activities since the beginning of the program in May 2014. The report was reviewed by a panel of experts, including Jeffrey Kingston (Temple University, Japan) and Jack Snyder (Columbia University, New York), and culminated with an oral defense at Riksbankens headquarters in Stockholm. EAP was represented by program leader Stein Tönnesson, deputy program leader Erik Melander, and core group members Kristine Eck and Holly Guthrey. We received excellent feedback on our work and plan to run full steam ahead until the end of the program in December 2016. A copy of our report can be found here.

Publication by Song Yann-Huei & Stein Tönnesson: The Impact of the Law of the Sea Convention on Conflict and Conflict Management in the South China Sea

Research associate Song Yann-Huei and  EAP Program leader Stein Tönnesson publish their article "The Impact of the Law of the Sea Convention on Conflict and Conflict Management in the South China Sea" in Ocean Development & International Law, Vol. 44, No. 3 (September 2013).

The article, which builds on a paper presented at the Securing Maritime Peace in Asia workshop, organized by EAP Research Associate Zou Keyuan at the University of Central Lancashire in April 2012, examines the impact of the UN Law of the Sea Convention on conflict behavior and management in the South China Sea during four periods: during its negotiation (1973-1982); from its signing to the entry into force (1982-1994); from then until the China-ASEAN Declaration on the Conduct of Parties in the South China Sea (1995-2002); and from the setting of a timeline for outer limits of continental shelf submissions to the events following the 2009 submissions (2003-2013). Ambiguous effects were found. On the one hand, the Convention has generated or exacerbated conflict by raising the stakes, failing to resolve key legal issues, and encouraging overlapping zone claims. On the other hand, it has provided obligations, language, and techniques for conflict management and resolution. The conflict-enhancing impact was found to have been more substantial than the peace-promoting effects. Nevertheless, the balance has shifted toward more emphasis on conflict management and also some utilization of the Convention's peacemaking potential. If this long-term trend continues and the Convention is more rigorously respected and applied, the Convention may in the end be found to have contributed to regional peace. 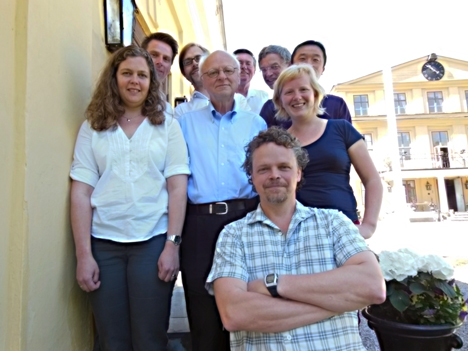 Meeting about Future Cooperation with Prince of Songkla University 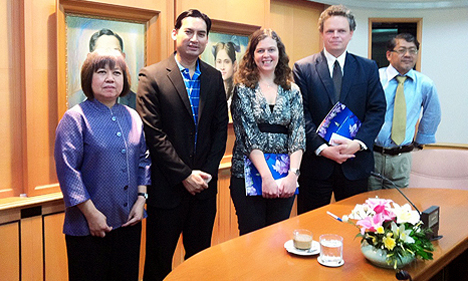 Participants of the workshop "Securing Maritime Peace in East Asia: The Role of International Law."

The East Asian Peace Program has jointly organized an international workshop titled "Securing Maritime Peace in East Asia: The Role of International Law" in Preston on 23 -24 April 2012. Legal scholars and specialists in other academic disciplines such as political science, history and peace and conflict research discussed the topic at hand. 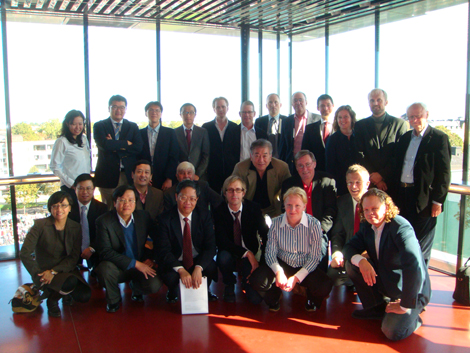 The East Asian Peace (EAP) program has passed its first year. Every January from 2012 to 2017 we shall pick a highlight of last year’s achievements. It must be a strong contribution to either explaining the EAP or gauging its depth and sustainability.

Among our several publications, the 2011 highlight is Isak Svensson and Mathilda Lindgren’s article ‘From Bombs to Banners,’ which appeared in Security Dialogue. This article adds a plausible explanatory factor that we did not consider when we submitted our program proposal to Riksbankens Jubileumsfond in 2010. We thought only about state behaviour. However, we did not restrict our research proposal to international peace, but also included internal or ‘civil peace’ in what we set out to explain. Civil peace does not only depend  on governments, but also on rebel behaviour. What Svensson and Lindgren suggest is that there has been a change over time in rebel behaviour from rural guerrilla struggles to city-based un-armed revolts: from ‘bombs to banners’ or from ‘People’s War to People Power.’ This has now become an essential part of the EAP research agenda. Another strength in Svensson and Lindgren’s article is its comparative framework. It speaks not just of East Asia, but asks if there is a global trend away from armed violence in rebel behaviour. Just as the article went to press, events in the Arab world put the thesis to a test. Tunisia confirmed the trend. Egypt too, at first. Libya and Syria did not. Svensson and Tönnesson will follow up with a paper for the International Studies Association convention in San Diego in April 2012, comparing rebellions in East Asia and the Middle East.

Other EAP achievements in 2011 were to organize the first Annual Conference in September, establish Susanne Schaftenaar’s program office at Uppsala University, enter into contractual relations with all of the program’s 22 researchers and research associates as well as the eight members of the Advisory Board, and engage in heated scholarly discussions over hypotheses that shall prove their value in the coming years. We also organized two panels on the ‘capitalist peace’ at the AAS-ICAS convention in Honolulu in May, where program leader Stein Tönnesson proudly received the 2011 ICAS book prize in the Humanities for his Vietnam 1946: How the War Began.