Gender, politics and violence in Thailand 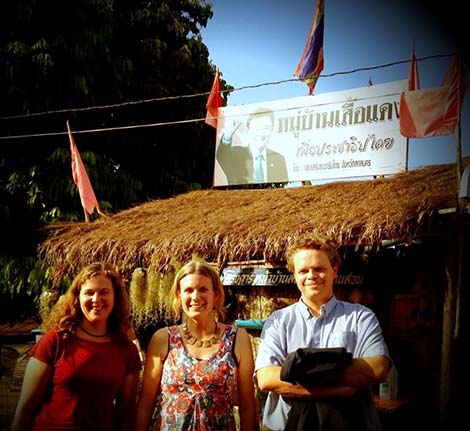 Who decides to use violence in a political struggle? This important question has been the subject of surprisingly little systematic research. Most studies on the causes of collective violence within a state have used aggregate units of analysis, such as country-years or opposition movements. As a result, the explanations provided by these studies tend to be structural in character, for example pointing to poverty or economic dependency on natural-resource extraction. While such aggregate structural explanations help to identify societies at risk, they have little or no leverage when it comes to explaining who uses violence. We thus know very little about what distinguishes the small minority that engages in political violence from the large majority that does not. What sets participants in political violence apart from non-participants? This important puzzle is the focus of our research project.

To investigate these issues, we conducted a survey in Thailand in 2012, in collaboration with the King Prajadhipok Institute in Bangkok.

The survey questions concerned issues such as political engagement, participation in violent political uprising, and – importantly – if the interviewee had used violence in such uprising. It also included questions on gender roles, trust and experiences of violence. The survey was administered to a nationally representative sample of 1,000 respondents as well as to a special sample of 200 political activists, who identified as either red-shirts (100 pers) or yellow-shirts (100 pers). Violent clashes between red and yellow-shirts have defined Thai politics in recent years (or similar). The reason for drawing a special sample of politically active and possibly radical red-shirt and yellow-shirt members was to try to obtain larger pool of people who had actually taken part in the rare event we aim to investigate: using violence in political struggle.

More details on the survey can be found on the subpages "Survey questionnaire development" and "Sampling".

The following scientific publication on the survey data are in the pipeline. Please contact the researchers for more information on the articles below.

The Return to Military Rule in Thailand: How Radical Activists Undermine the Democracy the Majority Wants

Thailand is once again under military rule following the coup d’état on May 22, 2014. The army claims the move was necessary as a means to restore order after months of political protest and that they will be pushing through political reforms. Protesters dressed in red and yellow have taken turns in disturbing law and order to reach their disparate political aims. Both sides claim that they want to strengthen democracy on behalf of the Thai people. But what does the Thai people want? With the help of survey data we demonstrate that the political views of the Thai electorate does not mirror that of the vociferous protesters. Perhaps surprisingly, given Thailand’s years of political turbulence, hard-core yellow and red activists make up a tiny portion of the country’s population and their understandings of democracy are radically different from each other as well as from those of the Thai population writ large. In other words, the political unrest seems to be largely spurred by a power struggle between two elite groups rather than the Thai citizenry.

This project is funded by the Riksbankens Jubileumsfond, and part of the East Asian Peace program.